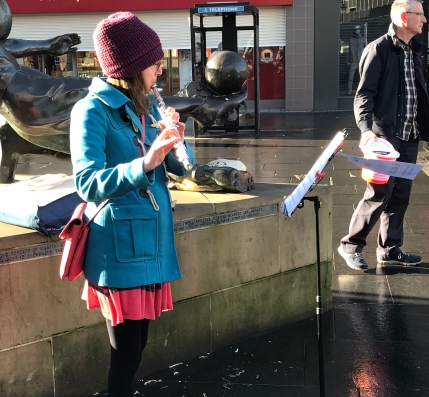 With accompaniment from a pneumatic drill, beautiful blue skies and sunshine busk number two was completed in Leicester city centre.

As mentioned in an earlier post, I was born eleven weeks premature at Leicester Royal Infirmary, so the neonatal unit was an obvious choice to fundraise for.

A photographer from the Leicester Mercury also came to take photos and a video, so I’ll be keeping an eye out to see where those end up.

In total £70.87 was raised in just an hour – thank you people of Leicester.

If you missed me today, I’ll be in Market Harborough on 14 April and Queens Road, Leicester on 28 July. Keep up to date by following my busking diary.

View all posts by nicolamirams